Only 37 per cent of respondents have a clearly designated person or team with responsibility for retiring legacy systems. 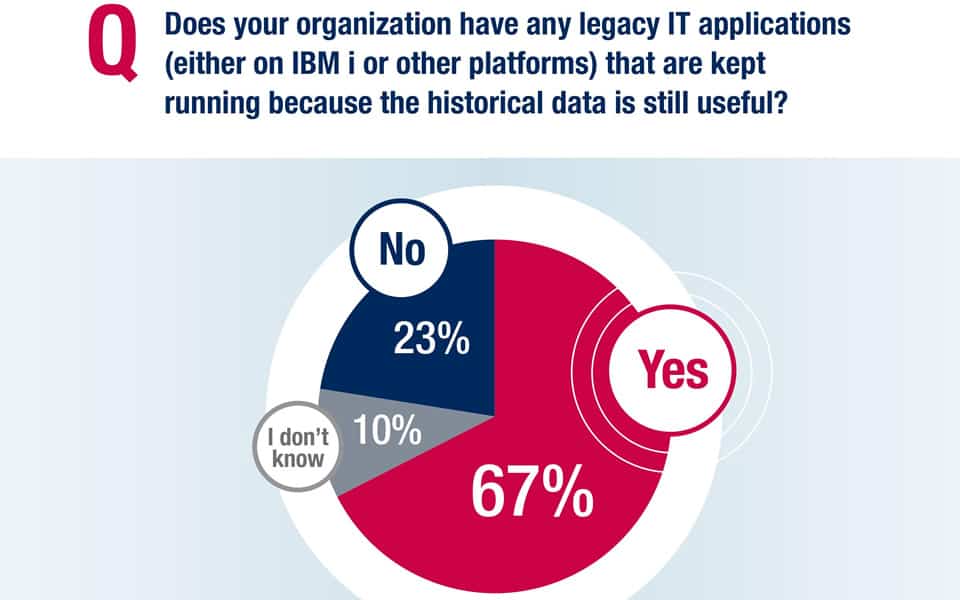 67 per cent of survey participants admit to keeping legacy IT applications running simply because the historical data they hold is still useful according to new research. However 60 per cent believe retaining these systems can hold back digital transformation initiatives because they are difficult to integrate with more modern systems.

40 IBM i users completed the survey from SoftLanding® Systems, a division of UNICOM® Global, at the recent International i-Power 2019 IBM i conference in the UK.

According to Jim Fisher, SoftLanding Operations Manager, organizations should ideally have a process for identifying older applications as they approach end of life and retiring them while moving the valuable historical data to a secure accessible store which can be easily integrated with modern applications.

“The challenge for many enterprises is that there’s often no one person or team with a remit to take on this task,” explained Fisher. “Only 37 per cent of IBM i users who took part in our survey could identify a designated person or team with responsibility for retiring legacy systems, regardless of the platform that they run on. As a result, many obsolete systems continue to live on long after being actively updated with new data, typically because they hold many years of historical information needed for compliance, or for operational reasons such as handling customer queries.”

“Any digital transformation strategy must include plans for how you are going to handle the existing legacy set up,” said Fisher. “If you can find an effective way to decommission these systems you can free up valuable IT resources that can then be ploughed into new digital initiatives.”

“If you can move the legacy data into a secure content repository, you can actually make it more accessible both to end users and new applications. For instance, our Columbus solution which has been developed for the IBM i platform improves access to business information, while also allowing greater levels of data security and control to be introduced where necessary.”

“This is an important consideration for organizations that want to limit the risks inherent in data access and, at the same time, make significant strides towards meeting regulatory compliance such as the GDPR.”

“Moreover, Columbus can be easily integrated with modern systems and can transform data and documents into modern digital formats so they can be shared via digital channels such as the web, email, social media and instant messaging.”

An overview of the survey and key findings can be viewed on an infographic here.